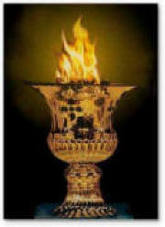 Fire is an extremely important symbol in Zoroastrianism as it represents God's (or Ahura Mazda's) ultimate wisdom and eternal light, as well as is a symbol of purification and Ahura Mazda's presence. The idea of the sacred fire is also a fundamental symbol in Zoroastrian worship. In every Fire Temple, Agiary, or place of worship, a sacred fire must be present -- it must be continually lit, fed a minimum of 5 times a day, and prayed to 5 times as well (Note: not all Zoroastrians are required to pray 5 times a day, but someone must pray to it, whether it be the Dastur or someone else) 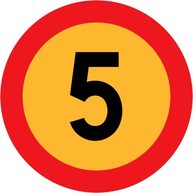 Zoroastrianism is very cosmocentric, as Zoroaster often drew inspiration from the heavens. Zoroaster realized the existence of One True God as he meditated on the universe, it is for this reason that the stars and planets play a large role in Zoroastrian belief. The number 5 is important as it refers to the 5 astronomical bodies easily seen from Earth; the sun, the moon, venus, mercury, and mars.  This number also is the minimum number of time the sacred fire must be fed each day as well as the number of days it takes to complete the death rites ritual, the day on which the soul finally reaches the spirit world. 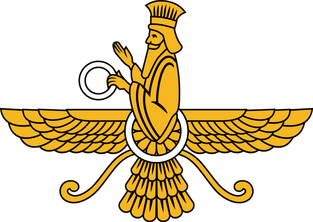 The Faravahar is the most common symbol in Zoroastrianism. It is a reminder of our purpose in life, to live in the image of Ahura Mazda and to strive towards goodness. The image contains a disc with wings representing a sun with wings, as well a human torso to represent humanity itself. The symbol depicts Ashur, the Assyrian god of war, representing the eternal war between good and evil (Ahura Mazda and Angra Mainyu), but the feathered robe gives the impression that he is also a guardian angel, watching over all, and aiding in the fight for good.