The Beliefs of Zoroastrianism﻿

Zoroastrianism was the first religion of it's kind and although it is monotheistic, it is described as dualism as well. (Review: Monotheism is the belief in one ultimate reality or god). Dualism is the belief in two gods or "supreme beings" that are opposites of each other. This might seem confusing at first -- how can Zoroastrians believe in only one god but also two gods at the same time?! Zoroastrians believe in one "residing" god, or in other words one god who is in charge. The other god they believe in, is always trying to become the god in charge -- so they worship the one in charge (monotheism) but recognize the second one trying to over throw Him (dualism)!

Angra Mainyu is Ahura Mazda's rival. These two have been constantly fighting for the past 12, 000 years! As Ahura Mazda's complete opposite Angra Mainyu represents all things evil and bad, and sometimes Angra Mainyu gets the upperhand over Ahura Mazda and bad things happen. When someone does something bad they are helping Angra Mainyu. Although they are evenly matched, Ahura Mazda keeps his place as the victor because he is made slightly stronger by the good deeds humans make. The battle between good and evil is present in everyone, and it is our job to try to do the right thing and choose Ahura Mazda's side (good) and to deny Angra Mainyu's temptations to do bad. For example, if you wanted to get a second piece of cake even though someone else hasn't gotten any yet, if you decide to take the cake you are choosing Angra Mainyu, but if you share the cake you are choosing Ahura Mazda. 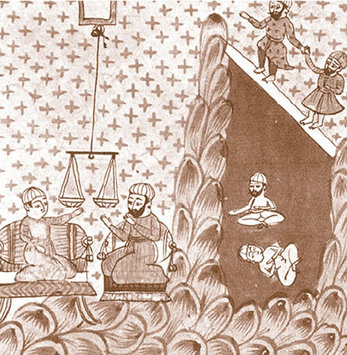 Zoroastrian's believe in an afterlife in heaven or hell. As I am sure you know, heaven is the place you go to if you have been good, and hell is the place you go to if you have been bad. Your actions throughout your whole life determine where you go -- for instance if for most of your life you have had good thoughts, done good things for others, and been a good person you will go to heaven. Even if you have also done some bad things, as long as you have tried your hardest to be good, you will go to heaven. However, if for most of your life you have been mean towards others, had hateful thoughts, and not tried to help others, you will go to hell -- even if you have done some good things, the good must outweigh the bad to go to heaven.
Think about it this way:
A good deed is like the air in a balloon (which is called Helium) -- when you do a good deed your soul floats
But a bad deed is like a rock -- when you do a bad deed your soul sinks.
So if you have more Helium (good deeds) than rocks, your soul will float up to heaven after you die, but if your soul has more rocks in it (bad deeds), your soul will sink down to hell.


"But what if you have equal Helium and rocks?" you ask?
That is when you go to a place called Purgatory, where you are challenged to make up for the bad things you have done and get rid of some of your rocks. If you succeed, you will go to heaven, if you do not succeed you will go to hell. Purgatory is just a temporary place, it is not like heaven or hell, which are permanent.


When a person dies, their soul is sent to the Bridge of the Separator, along with the guardian spirit. If the person has been good the bridge will widen helping them to cross into heaven, if they have been bad the bridge will narrow, and they will fall off the bridge into hell. 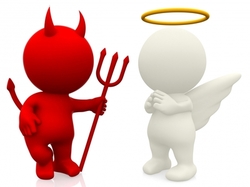 Zoroastrians believe in Angels (ultimate good) and Demons (ultimate evil), and that they can interact with people in their everyday lives, tempting them into bad things or helping them to avoid the temptation of doing these bad things. They also believe in a final judgement and that we will be saved by a messiah!
Zoroastrian theological beliefs are thought to have had influences on the development of Jewish beliefs, specifically during the Babylonian exile.
Continue →